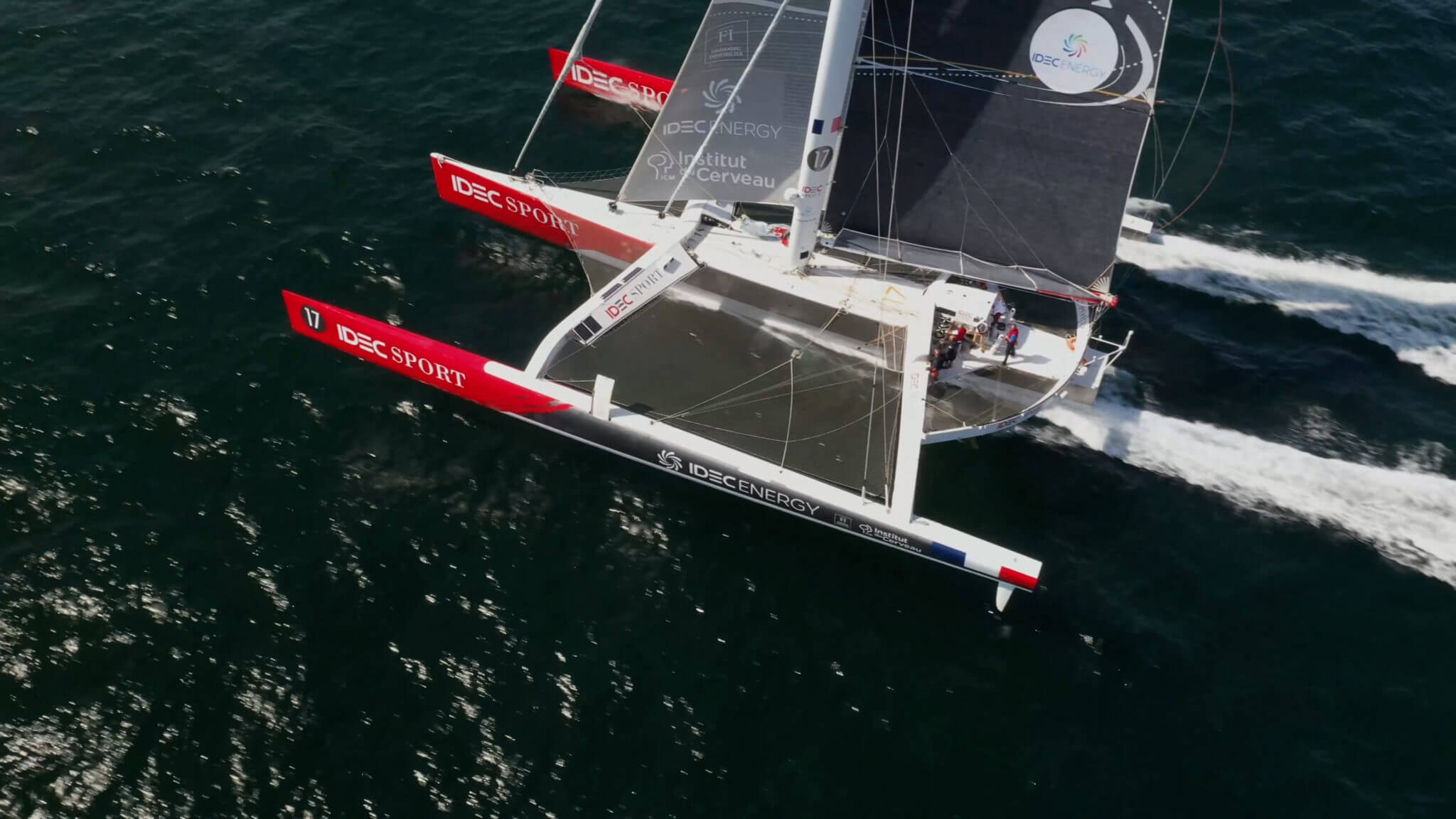 By psda-JMichel17 September 2021No Comments

Francis Joyon, supported as usual by his faithful teammates, Bertrand Delesne, Bernard Stamm, Antoine Blouet and Christophe Houdet, will be donning his record-hunter’s suit at the beginning of October, in an attempt to beat the reference time set in 2013 by Yann Guichard and Dona Bertarelli’s maxi-trimaran Spindrift on the Route de la Découverte.

A course dear to the heart of the title holder of the Route du Rhum, who has twice held the reference time on this same distance between Cadiz and San Salvador in the Bahamas single handed. Francis and his solid maxi-trimaran IDEC SPORT, launched in 2006, will leave their home port of La Trinité sur mer around September 21, heading initially for the region of Malaga and the South of Andalusia where his faithful partner GROUPE IDEC (18 years of common history) is initiating an ambitious logistics and industrial park with positive energy.

Francis and his gang

“The boat is ready” whispers Francis, always looking after his maxi-trimaran. “We worked on the appendages, which had suffered a lot during our Asian Tour, hitting a large number of unidentified floating objects. We are very attentive to her ageing. We react to any appearance of cracks. It is true that the use of the “small” mast, without affecting performance, has considerably reduced the stress on the platform. We are still looking for more simplicity in the maneuvers and we continue to find here and there some tricks. We take advantage of the end of summer to go out regularly. My son Corentin, permanent on the boat since the 2018 season, will not be with us. With Antoine, Christophe, Bernard and Bertrand, I will have a happy crew who know the boat perfectly to accompany me.”

“The record is sharp!”

Six days, 14 hours, 29 minutes and 53 seconds to cover 4,481 miles on a direct route! “This record is very sharp,” agrees Francis. “More than 25 knots average! We’ll need an excellent weather window to improve it. And a bit of luck too, as we know the weather conditions in the Bahamas are often very unstable. This Discovery Route is a fabulous, magical route, full of history. It is the route followed by Christopher Columbus. The islands are fascinating. I disembarked there once at the end of one of my solo records. The population was adorable. This route is full of promises of beautiful glides, of fabulous horizons. We are working on the smallest details of the weather scenarios with Christian Dumard, because global warming is a very real phenomenon that can be measured by the statistical increase in the frequency of hurricanes in this area of the Caribbean. The oceans are getting warmer, and provide fuel for the storms.”

Stand-by in Cadiz in early October

Francis intends to leave Brittany around September 21st, in order to start his stand-by in the last days of the month, for a departure at the beginning of October, true to his legend as a sailor who does not like long stand-by. IDEC SPORT will moor for a few days in Algeciras, then in Malaga before heading for Cadiz and Puerto Sherry, and will accompany the Public Relations operations organized by the GROUPE IDEC, which is very much involved in an ambitious logistical and industrial project in Andalusia.

GROUPE IDEC is launching the development of a new XXL logistics and industrial zone in the south of Andalusia, covering more than 300 hectares: Puerto Seco in Antequera. Its ideal location at the crossroads of all the continents and its direct access to the largest transport networks make it a strategic crossroads of exchanges. This park is being developed to allow the integration of a great mix of activities and services and assets with high added value to create a rich and varied space. The energy issues are also an integral part of the project since it aims to be energy self-sufficient and to limit its carbon footprint.

This approach is greatly appreciated by Francis Joyon and can be found on board the maxi-trimaran, which also bears the colors of IDEC ENERGY, the subsidiary of the GROUPE IDEC dedicated to the creation of innovative energy solutions.